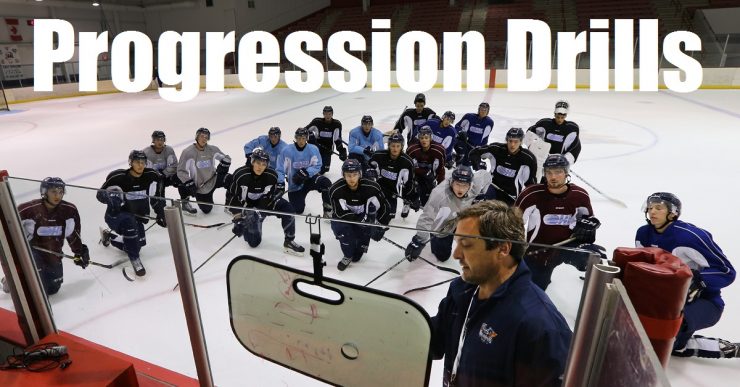 We are well into our season now, practices have become routine, maybe even monotonous, and the players are looking a little complacent. It’s time to spice things up a bit so that we can continue to challenge our players to keep developing their skills.

Identify a weekly drill that is a staple in your practices. This should be the first drill that comes to mind when you think of your ice sessions and, chances are, it’s probably a flow drill. Let me rattle off a few of the most common: Russian Circle (or horseshoe), Around the World, Canada Cup, 4 Dot Drills, etc. For this demonstration, we’ll use the Russian Circle.

Now let’s take that drill and slightly alter it to make it more challenging for the players. You can add an extra pass (or two), add an extra body (or two), or add an extra shot. Another helpful trick is to relate this drill to a specific game situation where your team needs improvement.

For example, your team has been trying to carry the puck out of your D-zone and turning the puck over at the blue line instead of chipping the puck off the wall. Let’s take the Russian Circle drill and add a bank pass as a progression. Magical, now it’s the Russian Circle Bank. Explain to your players how this relates to their past games and how they can create more odd man rushes by by-passing the D-man holding the line with a bank pass.

There’s always a learning curve associated with introducing a new drill, so don’t expect your players to have it down pat on the first try. Give them a couple more sessions to become accustomed to the new timing and skills. They’ve got the hang of the latest progression, now let’s up the ante.

Chips off the wall have been working great but now our team needs to work on moving the puck quicker. Let’s do a various that includes a couple extra passes as well as the concept of

I’ve only listed two progressions to this drill but there are literally dozens of different variations that can be derived from the basic Russian Circle. Get creative next practice and alter a version that will best help your team improve this season. Nobody knows your team better than you! Create your free ProSmart Hockey team to receive weekly divisional practice plans, core skill videos, & timely blogs.