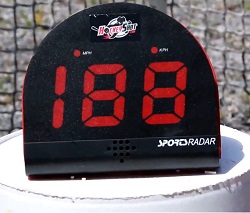 If you practice your shooting on a regular basis I recommend that you invest in a hockey radar gun. There are quite a few radar gun’s available but most of them are fairly expensive and a lot of them require somebody to hold the gun and read out the time (designed for baseball or football). After careful research I finally found a radar gun that I thought would be good for hockey. I started using the Speed Trac X, which I found to be the best radar gun at the time. Since then HockeyShot came out with their own radar gun I have been using this radar gun for a few years now and I am very happy with it. The radar gun I use is the HockeyShot radar gun

Points to mention
If you are thinking of buying this radar gun I should mention that not EVERY shot will read properly. The odd time (maybe 1 in 10 or 20) the radar gun will throw a low number, I’m not sure if it is reading the speed of the hockey stick or something else. If you want to learn more watch the video review below.

Where to Buy the Radar Gun

Overall I love this radar gun, it helped me take my slapshot from an embarassing (off ice speed) 55MPH up to 75 MPH in just a few months
If you want to buy it you can get it on this page at Hockeyshot.com to get $10 off use our coupon code: HOWHCKY001