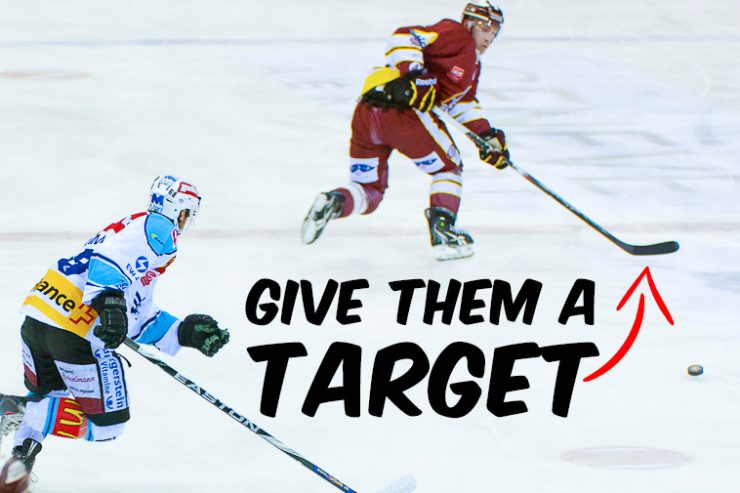 As a hockey coach and a player I am always trying to become smarter, better, and faster. What some players don’t realize is that by knowing your position and knowing your plays you will become a “faster” player. A positionally sound hockey player could be physically slower than every player on the ice, but by being in the right spot and making the right plays he could still have an advantage over the fastest player on the ice.

Recently I have been reading the book Hockey plays and strategies (Amazon.ca link for Canadians) by Ryan Walter and Mike Johnston and I have found a lot of great plays, strategies and tactics that are important for any hockey player to know. The trick with putting these plays into practice is having your other team mates on the same page as you, so in this article I am going to go over 5 breakout plays, how to perform them, and the best time to use each one. These plays are started by the defensive partners, so as long as you and your defensive partners know the plays you should have no problem initiating a decent breakout. These plays are crucial for a good breakout!

Knowing these 5 breakouts should give you an option in every situation you face on the ice, no more giving the puck away over and over until the other team scores!

These strategies are explained in the book Hockey plays and Strategies by Ryan Walter and Mike Johnston, I have re-drawn the diagrams as shown in the book and explained the breakouts in a similar fashion as they were printed in the book.

In this breakout D1 is moving for the puck and D2 has an eye on the play. D2 will call “UP” to D1 letting him know that the best play is to turn up the strong side of the ice and pass the puck to the winger on the boards (LW). If the winger is tied up while D1 is moving with the puck the centermen is there for support and D1 can also make the pass to C.

The best time to use this breakout is when the other team has players near the net, or behind the net (or moving to that zone) and the best option is to move the puck right away up the strong side of the ice.

C is there for support (another option for D1) and RW will move across the ice to provide support once LW get’s the puck. 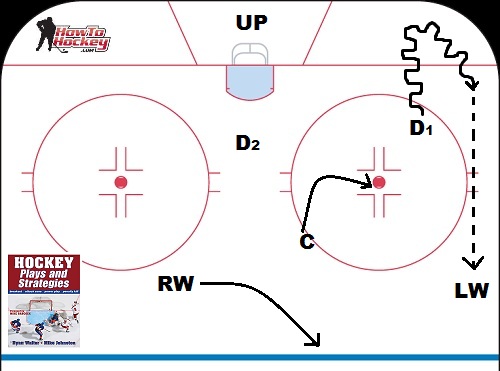 In this situation D1 has moved to pick up the puck, while D2 is reading the other teams position. D2 recognizes that the other team has flooded one side of the ice so he calls “OVER” to D1. This tells D1 that the best play is to pass the puck behind the net to D2 (A direct pass is ideal, but a bank pass can be made as well)

Caution: In this play it is important that D1 makes the pass quickly to D2, some players may try to skate with the puck towards D2 before making the pass, however this would carry the pressure over to D2’s side and could result in a turnover.

The best time to use this breakout is when the other team has flooded D1’s side of the ice and D2 can quickly move to get a pass behind the net. 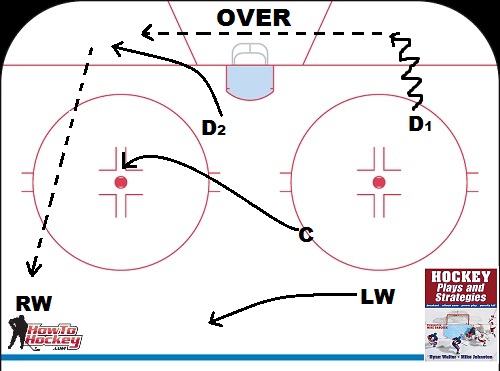 In this situation D1 is moving for the puck (or has the puck) and he has a step on the forechecker. D2 yells “WHEEL” to tell D1 to skate with the puck around the net. D2 should stay in position as a “pick” so that the forechecker can not easily cut across the top of the crease and check D1 on the other side. D1 should use the net as a screen by cutting close to net while skating behind it (not giving the forechecker room to check him, or get a step). D2 holds position in front of the net until D1 makes a pass, or skates the puck up ice. RW provides an option for a pass, C supports low giving D1 another option for a pass, LW moves across the ice.

The best time to use this breakout is when D1 has some speed, and the other team does not have pressure down low. 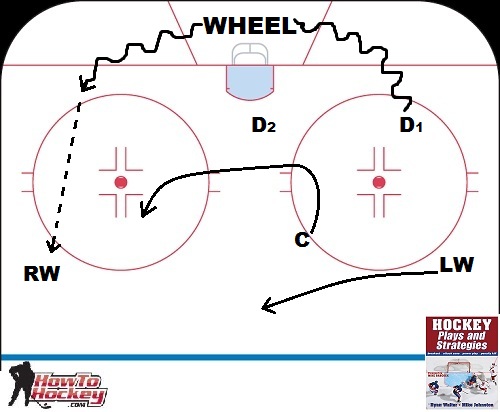 The Reverse is a good “plan-b” for the WHEEL breakout. In this situation D1 has started to skate the puck behind then net, however their is a forechecker right behind him and checking hard. D2 yells “REVERSE” signalling D1 to bank the puck hard off the boards (and behind the forechecker) to D2

The best time to use this breakout is when D1 initiates a WHEEL breakout, but cannot complete it due to a quick forechecker right on his tail. 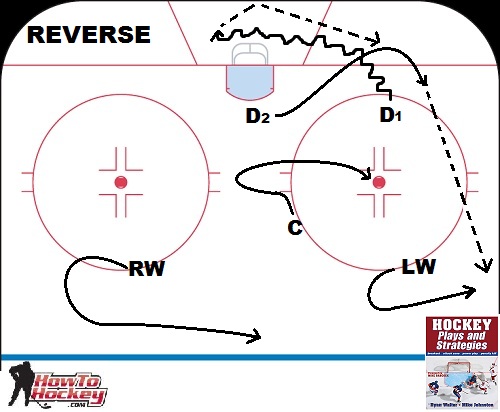 “Against teams who pinch down with their defense on rimmed pucks, the wingers who receive the rim must be able to protect the puck, control it, and then move it to support. In this situation, RW must be able to control the puck and make a play, skate with the puck, or chip it behind the pinching defenseman. As mentioned earlier, the ability to get pucks off the boards under pressure is a skill that also involves a component of toughness” – Ryan Walter & Mike Johnston

Caution: D1 and D2 need to be on the same page here so either D1 or D2 should call “RIM” otherwise either defencemen could confuse the breakout with the OVER play.

Jeremy’s note: As a coach I prefer to see direct passes, many newer players will ALWAYS rim the puck as it is the easiest way to send it up the ice. Usually it’s laziness so I try to encourage my players to make smart plays and direct passes, although as mentioned in the book, sometimes the RIM breakout could be the best play.

If you learned anything from these breakouts I highly recommend picking up the book, I have links at the top and bottom of this article.

How to start implementing these breakouts

As a coach implementing these breakouts comes down to proper practice planning, and getting all the guys on your team on the right page. You can pick up a copy of the book, photocopy pages 10,11 and 12 and hand them out to your players, and then start using them during practice. Once you have the book you can review the other 200 pages for some more great plays and strategies

As a player there is nothing more frustrating than trying to play positional hockey, only to have the other guys on your team completely out of place, or moving the puck to the wrong spot. The easiest way to start using these breakouts would be for the defensemen to start talking and discussing the 5 different breakouts while on the bench. Try using 1 or 2 each game so you can eventually commit them all to memory. Once you and your partner knows the 5 different calls you can start yelling them out when the time is right during the games. Most of the work for the breakouts is done by D1 and D2 so start by getting your defensive partner on board, and then work on the forwards, most wingers should know where to be anyways.

Quick Tips For Breaking Out

I found this great list of the top 10 fun hockey drills. I thought I would share it on our blog for any coach that is looking for some fun hockey drills.A lot of hockey coaches want nothing more for their kids to win...