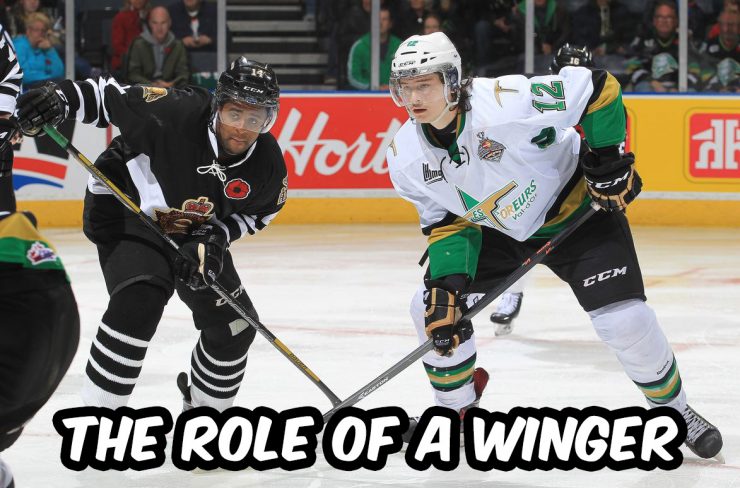 There are two wingers in hockey, right wing, and left wing. Both wing men, as well as the centermen are referred to as forwards. The forwards are offensively minded and will score the majority of your teams goals. As a winger you will mostly play on your side of the ice, right wing will play up and down the right side of the ice (to the right of the centermen at faceoff) and the left wing will play on the left side.

The responsibilities of a winger

Your general duties as a wingman are to dig in the corner, feed the centermen and defence, wreak havoc in front of the other teams net, and outsmart the other teams defensemen on both ends of the rink. I will explain more below

A wingers duties and positioning in the defensive zone 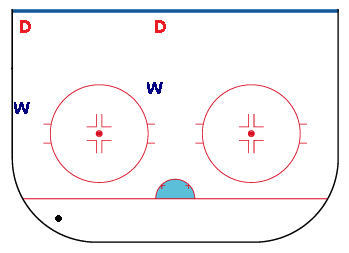 This video was created by Kevin at HockeyShare.com, thanks for the awesome tips! Most wingers start just trying to cover the defense. As you get older and more skilled you can come down further and further like shown in the video.

What is your job in the Defensive zone?

If your team has the puck there are a few ways to get the pass. The easiest way to get a pass is to take a few quick strides forward and take a pass at the hash marks along the boards, now your job is to break out. The safest way to break out of your end is to bank a pass off of the boards to your center men who should be breaking out, or if the defensemen is right against the boards you can gently redirect the puck to your centermen, or your winger who should be cutting to center (Always look before passing because the last thing you want to do is give a one timer to the other teams defence!). Another option is to carry the puck out yourself, don’t try anything to fancy because if you mess up and the other team scores it will be very embarrassing.

How to break the puck out of the defensive zone

One of the biggest responsibilities of the winger in the defensive zone is breaking the puck out. Usually you will be taking a pass from the defencemen and it is then up to you to receive the pass, control the puck and either break out with it, or make a quick pass to your centremen or other winger. Playing the puck off the boards and making yourself available to receive that pass from the defencemen is VERY important. Here is a great video from HockeyUS.com that explains how you can become more effective when breaking out of the defensive zone

A wingers duties in the offensive zone 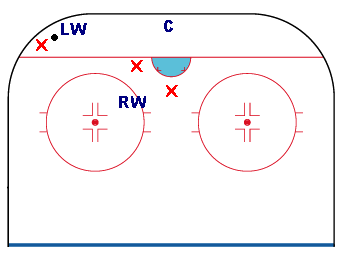 When you are in the offensive zone your team is trying to score a goal. You will mainly play in the corner, inside the circle, and in front of the net. When the puck goes into your corner it is your job to get it out. If the puck is in your corner you have a few options, the most common and usually the best options are.

Sometimes when the puck is in your corner the other teams defence will get there first, as it is their job to get the puck out. If this happens you can try to take the puck from them, or tie them up and wait for your centermen to help you out. A good trick is to put your knee between their legs and press them up against the boards, this makes it hard for them to move the puck.

Wingers duties in the Neutral Zone

Typically in the neutral zone you are either breaking out, or back checking. If you are on the attack you make hard passes through the neutral zone and feed the head man. This means if you get the puck out of your end you should be looking for a streaking centermen or your other winger. If there are no options try to break into their end, and if that is not an option just cross the red line and dump the puck in (then chase it, or get a line change). If your team mate has the puck and you are breaking out skate for open ice and try to get that lead pass.

If the other team has the puck in the neutral zone you are playing defense. You should be hustling to get back into position and get the puck from them / cause a turnover. Keep an eye on who has the puck, and where they might be skating to or who they might be passing to. If you see a potential passing lane try to block it.

What about the faceoff? 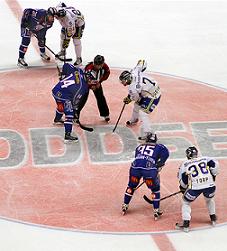 For a winger you also have a role on the faceoff. When you faceoff you will be facing off against the other team. When you are on the face off both teams want the puck, but only one team can have it. This means your role during the face off is to either get the puck, or stop the other team from getting it. Talk to your centermen before the faceoff because he usually has a devious plan as to what he is going to do with the puck. Most face offs involve winning the puck back to the defensemen, when this happens your job is to tie up your man so your defensemen has time to make a play. Sometimes the centermen will pole the puck forward and have you pick it up with speed, or the centremen could tie up the other centermen and have you get the puck. This means you have to explode off of the hash mark and go right for the face off circle.

A wingers responsibilities on the power play

A power play means that the other team is playing with one less man on the ice. Your position does not change during the power play unless you have a set play with your team. When the other team is down a man they will play with two defensemen and two forwards, this means that on the faceoff there will one open spot. This means if you are on the open wing, and the centremen wins the faceoff to you, you will have some time to skate with the puck and set up a play.

Wingers duties on the penalty kill

When the puck is in the defensive zone most teams play in a box formation, this means your two defensemen will play down low, and the centermen and the winger play up high. The idea is your formation will look like a box, and you want to keep the other team outside of the box, and take away any passing or shooting opportunities.

The Role of a Centerman

Want to read more about hockey positioning? Check out our article for the role of a centerman 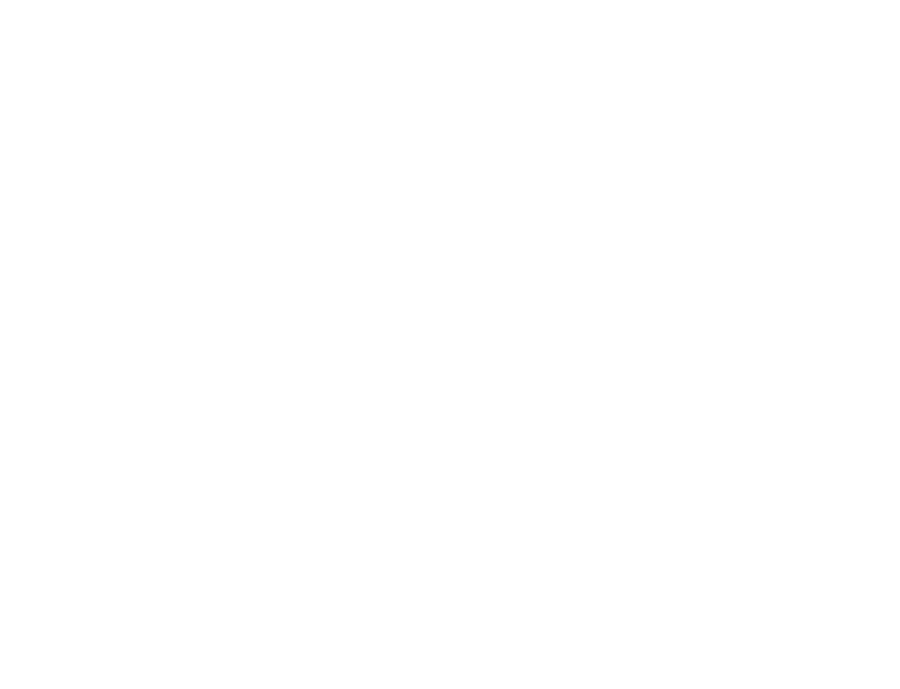