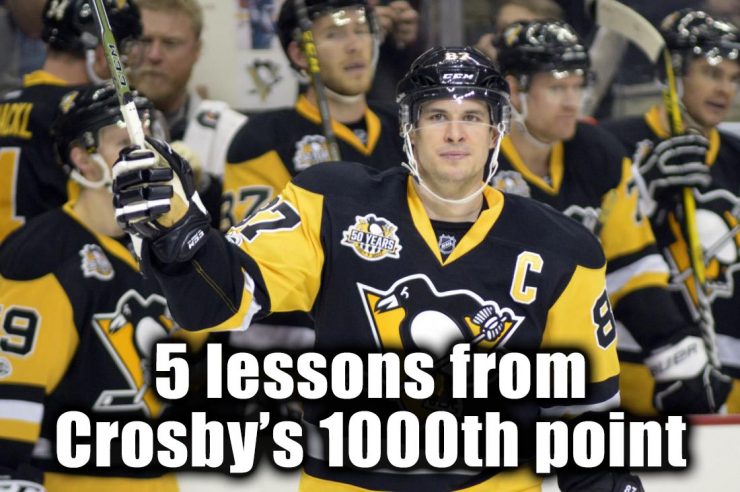 I invite you to watch the video below which shows Crosby record his 1000th point. I recommend you watch it a few times, the first time to admire it, and a few times after that to STUDY it. Paying attention to the details will help you become a better hockey player, there is so much you can learn from watching your favourite players over and over.

After you’ve watched the video a few times, you can read the rest of the article, which was sent to me from my good friend Jim Vitale at Vital Hockey Skills. It will be fun to compare what you noticed, VS what a long time AAA hockey coach and skills coach picked out. 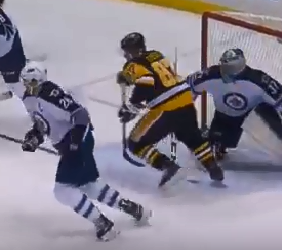 They say if you can’t skate you can’t play. I know a lot of people that can skate and can’t play. Crosby proves that acceleration is what matters. Wheeler can skate very well, but he sure does get beat to the puck on this one. The amazing thing is that Crosby’s stride length is probably about ¾ the length of his. This is where you can’t help but think about all the times coach pushed you to get out of your comfort zone and “find speed”. Not many guys get it, not many understand the level of commitment in practice necessary to win a 10 foot race against a giant for a loose puck.

There is a big difference between keeping up with someone and actually winning a one on one battle for a puck. The first means you are moving your feet to get there, but become a passive spectator during what should be an aggressive struggle for the puck. Winning a one on one battle means doing whatever it takes to gain the inside position on a player during pursuit of the puck and it usually starts with some sort of a stick fencing match. 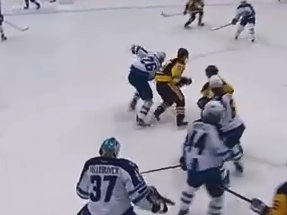 Crosby’s combination of a wack and then a lift of the defenceman’s stick not only lets Wheeler know he is there, it makes his life just difficult enough to allow Crosby to slip under and get to the puck first. Had Sidney not been proactive with his stick on the pursuit, he may have won the foot battle, but never would have gotten the inside offensive position on the puck.

In case of falling, widen base 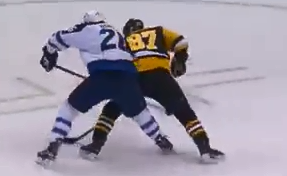 Basic principles of stability state that when something is wider on the bottom than it is on the top, it will stay upright. Also, when the top of something stays in line with the center of the base, it is safe from the risk of falling over. As soon as Crosby has gained inside position and secured possession, he instinctively widens his base for stability as the defenseman makes a last attempt to avoid disaster. When watching the video it really shows how strong his legs and lower back are to keep his center of gravity aligned with his widened base. 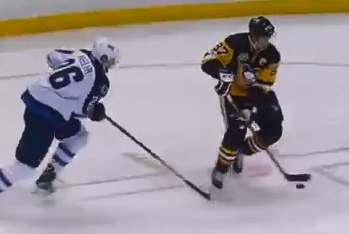 The winning a battle doesn’t always mean you win the war. To win the war you need to be able to get away with the goods. In this case, Crosby wins the physical pursuit of the puck, but Wheeler doesn’t plan on rolling over and dying any time soon. Crosby makes sure not to stand around watching and patting himself on the back. He pumps his right leg and gallops out of the defenseman’s reach. This lets Crosby create enough time and space for himself to be able to finish the play and make history. 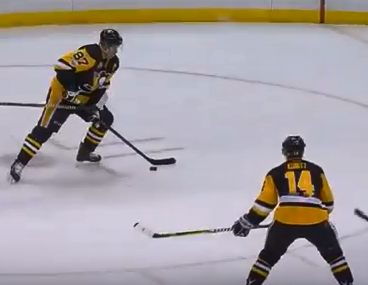 When you watch the end of this play in slow motion, it is amazing to see that Crosby makes eye contact with the goalie and fires over a no looker to Kunitz for the apple. There is no doubt in anyone’s mind that Crosby could have shot and most likely would have blown it past the tendy at point blank like this. Why does he pass? Most likely because good snipers aren’t egotistical when they get themselves on the scoreboard. They aren’t emotional. Their ability lies in the gift of quickly assessing the probabilities of success with the various scoring options that exist. Crosby knows that his probability of getting a point (in this case his 1000th) increases about 65 % by moving the puck horizontally across the royal road. Thus, he takes the higher probability option and turns it into great opportunity for the Penguins to convert on the turnover.

For my full voice over analysis of the play you can watch my video below. If you’d like to see more you can subscribe to my Youtube Channel here 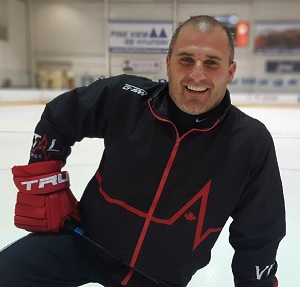 About the Coach / Author

Jim Vitale is a AAA coach in the Greater Toronto Area and Owner of Vital Hockey Skills. His passion stems from the application of principles of Physiology and Biomechanics to all areas of hockey skill development. Jim is a seasoned coach and has in-depth knowledge of systems as they pertain to team tactical play.