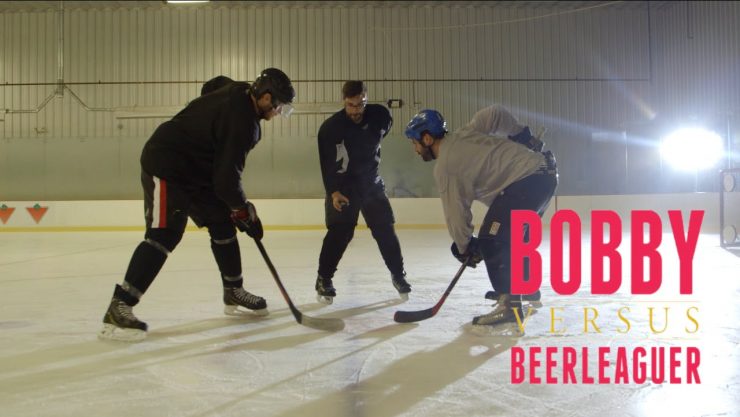 Sometimes it’s fun to pretend. If you grew up playing hockey and ended up in the beer leagues the thought has probably crossed your mind “I wonder how much better those NHL’ers actually are” or “I bet if I practiced a little more I could have made it”. Well, now we finally have a comparison of sorts to how an average beer leaguer would stack up against a pro.

I wouldn’t call this guy the strongest men’s league player, but you can still see how tough it would be to take the puck off a pro.

In this video Ryan creates a move, and the beer leaguer has to recreate the same move. The guy has 0 chance of even beginning the moves Ryan calls out. If you want to see how you’d do, just remember the four moves and see if you can do them on your first try during the next stick and puck.

Think you’re a pretty good centermen? Watch this video and tell me how many draws you think you’d win.

In this video a beer league player basically gets physically assaulted by Ryan. A puck is in a faceoff circle and the other player tries to get it. The only problem is Bobby Ryan stands between the beer leaguer and the puck.