Deke of the Week 6 – Bank Shot

If you ever wanted a solid go-to move to break out of your own end, well…here it is. I use this move on a regular basis and it is pretty much fool proof. There is nothing super fancy about this move, but it is very effective and can result in a breakaway in some circumstances.

The best time to use this move is if you catch the opposing player standing still, or skating slow near the boards. If you need to get by them you COULD try a risky move, or go with an almost sure thing and just bank the puck off the boards. If you want to be extra sneaky you can fake like you are going to try to squeeze by them along the boards, then just bank the puck off the board and quickly dart the other way and get the puck behind the player.
Key Points

Subscribe to our blog by email to get notified of new moves!

deking how to deke stickhandling 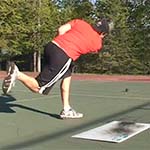 6 Ways to Improve your Hockey Skills over the summer

How great would it be to step onto the ice next season and be BETTER than the last time you skated? Well it is quite possible and the summer time is a great time to sharpen some of your skills. The only thing that is...