I hear a lot of requests on hockey forums like modsquad hockey and the rink on hfboards.com about the curve of a hockey stick. Questions like “what is the best curve for shooting”, “what is the best curve for a toe drag”, “what curve should I use for saucer passes, or to score more goals”. I thought that it would be great to have a detailed guide to the curve, so hockey players could decide which one is best for them.
Luckily I found one published on the physics of hockey website. The Author, Alain Haché was kind enough to let me post the article here on How To Hockey.

Hockey sticks: what’s in a curve?

Alain Haché, Ph.D.
Université de Moncton, Canada
Because hockey sticks come in so many shapes, it can be hard to make sense of it all. One feature of particular importance is the blade – the only point of contact between the player and the puck. Players attach a lot of importance to the way it is curved. Looking at the Koho (yes it uses older curves as examples, but it’s still relevant) sticks in the figure bellow, you see that each one carries a unique curvature pattern. There is more to a curve than left- and right-bend indeed.

Figure 1: a few sticks by Koho™ 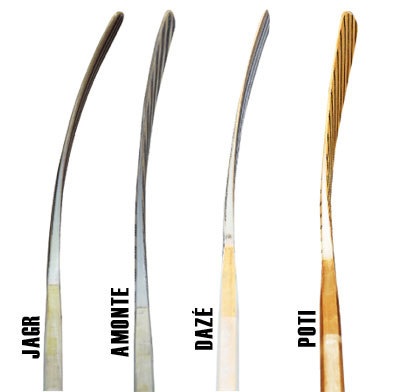 The stick blade, a curved and twisted surface, is complex enough that it can’t be precisely described in just a few words or numbers. Nonetheless, there are some key aspects that need to be considered, the first of which is the amount of curvature in the blade. The more U-shaped it is, the more pronounced the curve. Hockey leagues such as the NHL impose a limit on the amount of curvature:

The curvature of the blade of the stick shall be restricted in such a way that the distance of a perpendicular line measured from a straight line drawn from any point at the heel to the end of the blade to the point of maximum curvature shall not exceed three-quarter of an inch (¾”). NHL Rulebook 2007.

If you can’t picture this strange verbiage, the following drawing should help:

The rule says that the red line should not be longer than ¾ of an inch, or 1.9 cm. Some people use the dime technique (not quite ¾”, but close) whereby the coin shouldn’t slip vertically underneath the blade when its lying against the floor, but nowadays NHL referees have fancier measuring gadgets to control illegal sticks. Note that the ¾’’ figure is an increase from ½’’ as of 2006. We will discuss the implications of that rule change later.
A second key aspect is where the curve begins on the blade. A blade can be curved like a circle, smoothly and uniformly, but sometimes it is not. Take a look at the Reebok™ and Easton™ sticks in Figure 3: the “Yzerman” stick has a curve that begins in the middle of the blade whereas the “Amonte” one starts at the heel. These are called “center” and “heel” curves, respectively. A third one is called the “toe curve” and has a bend closer to the end of the blade. While the difference between center- and heel-curves is mostly a matter of preference (hockey players can be very picky), a toe-curve makes scooping the puck away from someone else a little easier.

Figure 3: sticks by Reebok™ and Easton™

Next there is the “loft” or “face” of the blade. The loft is the tilt angle of the blade; you can see it when holding the stick normally and looking from the above. A blade that tips backward is said to be more “open faced”, very much like a 9 iron is compared to a 3 iron in golf. For example, notice in Figure 1 how the “Poti” blade has more loft than the “Jagr” blade. As in golf, the more tilt a hockey stick has, the easier it is to lift the puck up.
If blades have a heel they also have a toe. The toe is the very end of the blade, and it comes in two basic shapes: round and square, as Figure 4 shows. The difference is that a square toe offers more blocking area and the round toe gives more puck control at the tip.

Figure 4: round and square toes 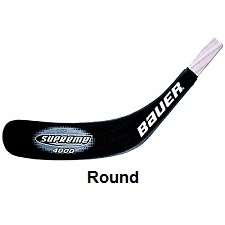 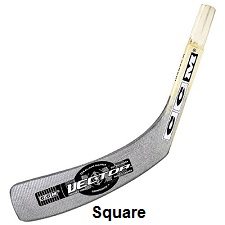 Finally, the “lie” is the angle the blade makes relative to the shaft. It’s is measured as a number between 4 and 8 and printed in front of the shaft (most curves for senior sticks are between 5-6 lie). With a proper lie, the bottom of the blade is flat against the ice when the player is holding the stick normally.

How does the curve affect shooting?

It is a common misconception that curved blades became popular because they produce faster shots. The truth is, the curve is mostly about puck control, not puck speed. A curved blade makes the following three actions easier to achieve:

Spinning gives the puck more stability, like a football. In a “saucer pass”, spin is especially important because the puck must land flat on the ice. Although it is technically possible to spin the puck with a straight blade, it can be done better and more consistently with a curved blade. Applying cloth tape to the blade also adds adhesion and helps the puck spin.

Figure 5: spinning the puck with a curved blade

Spinning the puck is also done by goalies, and indeed most of them use slightly curved sticks for that purpose.
What about the negatives aspects of a curve? What helps the forehand shot hurts the backhander, unfortunately. Some accuracy is lost in that respect, but considering the popularity of the curved stick in the NHL, it seems that the benefits win over the drawbacks.
The reason why the NHL sets a curvature limit is probably to avoid excessive puck control. Can you imagine blades shaped like half-circles? Just grab the puck and go! Some argue that straighter blades are safer because they tend to keep the shots low. Deeper curves means easier upward shots, but the loft is probably the more important factor, especially in a slapshot where puck control is limited to a very short impact time. When the league decided in 2006 to increase the limit from ½ to ¾’’ (at par with the International Ice Hockey Federation), some goalies and defensemen expressed concerns about flying pucks. Their concerns may be justified if the new rule allows for more loft than before. However, according to the rule statement, it is not clear whether the “point of maximum curvature” is taken anywhere on the blade, not just at the bottom. If so, the new rule will allow players to put more loft (or twist) on their stick, making high shots more likely.

What curve should you choose?

Now that we understand blade curve basics, how should you decide on your next purchase? If you’re an experienced player you won’t need advice, as you already know what works best for you. High-level players select their stick based on their position (defense or forward) and on what type of curve they are accustomed to. Beginners, on the other hand, don’t need to go into the nitty-gritty and should select a curve that is neither flat nor overly bent. Buy what feels right, and as you get used to the stick, you might develop a preference for it. After all, an accurate pass, a hard slap shot and good puck control is above all a matter of practice and skills. But of course, don’t forget to blame your stick for misfires.
If you are ready to select a curve pattern check out the blade pattern charts on Hockey Monkey. You should also check out their clearance section while you are there! You might find some great deals on sticks.
Big thanks to the guys at the physics of hockey for this article. Check out their website for more cool hockey articles.