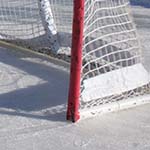 How and When to Shoot Low in Hockey

A lot of hockey players like to snipe the top corners, and why wouldn’t you? It looks pretty and makes you look like a pro. The only problem is that when you start getting better at hockey, so do the goalies. Goalies love to rob players with their flashy glove saves, or brilliant blocker saves. In order to continue to score a lot of goals you have to know how and when to shoot for the bottom corners.
To help you score more goals I have outlined the best reasons to shoot low

How to Shoot Low in Hockey

Many hockey players have a hard time shooting low, they try to take a nice hard shot for the bottom corner, or maybe try to send one just over the goalies pad, but they just can’t get the accuracy right. Shooting low is actually pretty simple if you know what to do. Just follow these two simple steps below, and you should be sniping low in no time.
Follow through
The follow through is simple, if you follow through high, the puck will go high. If you follow through low, the puck will go low.
Point the blade
When you are following through, make sure you point the blade of your stick at where you want the puck to go. By pointing the blade of your stick you will help guide the puck in the right direction. Pointing the toe of the blade of your stick also helps remind you to roll your wrists. Rolling your wrists, and adding a bit of a snap in your shot helps with accuracy, and also adds a bit of power to your shot. Which brings me to my next point
Don’t let up on the shot
A lot of players tend to let up on their shots when they shoot low; they think if they shoot too hard than the puck will go high. While laying off on the power does help keep shots low, this is not what you want to learn. If you lob pucks at the net the goalie is going to easily stop them, collect the rebound, and then laugh at your weak little flutter puck, you don’t want that and neither do I! Practice hitting the bottom corners with full force, man up, take a powerful shot, follow through low, point the blade of your stick, and score more goals!

When to shoot low

I might be a bit biased because I score quite a few goals this way, but the way I see it, if the goalie doesn’t have the bottom of the net covered, shoot low. Even if the goalie stops your shot there should be a juicy rebound waiting for you, or your team mate.

When to shoot 5 hole

The 5 hole (spot between the goalies legs) is a great spot to score goals, but there are some situations that are better than others if you want to score. Shooting 5 hole from the blue line…. not a good idea. I have always found that the closer you are to the goalie, the less time the goalie has to close the five hole, and the better chance you have of scoring. If the goalie has the five hole open, and you are in close, snap a quick one right between their legs! Most goalies won’t be able to close the gap in time, and that means you get to light the lamp.
I have found another great way to score 5 hole is on a deke. I used this move A LOT from Pee wee to Bantam. All you have to do is skate in on your off wing, fake a shot to the closest side of the net, and then pull the puck back and cut to the other side of the net (back off a bit from the crease to avoid the poke check). Every goalie is trained to move where the puck moves, by moving the puck from one side of the net to the other, you force the goalie to move. If the goalie doesn’t move (because you from them with your fake shot) you shoot far side and score. If the goalie does move it will create openings, the easiest one to score in is the 5 hole. To sum up the move, come in on your off wing, cut from one side of the net to the other, shoot 5 hole (fake a shot for extra style points)

Here is a video that gives you a few pointers on shooting for the bottom corners. You should also check out our other wrist shot videos where we have another great wrist shot accuracy video (The prequel to this video, showing you how to snipe top shelf)

I hope that these tips will help you score more goals in hockey! Don’t forget to practice a lot and have fun!