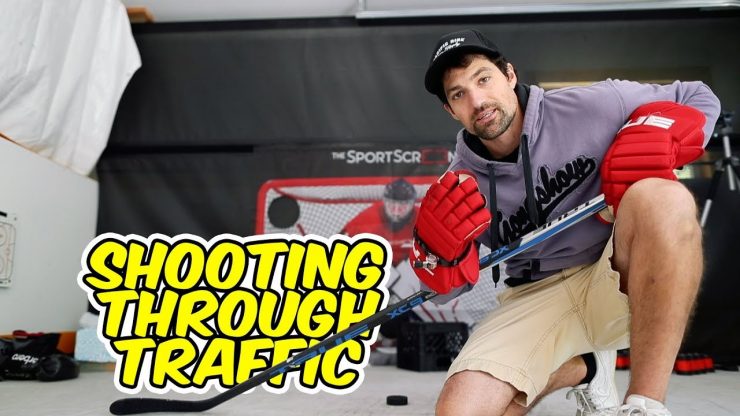 Why Changing Your Shot Angle is an Important Skill to Practice

In shooting you need to practice power, accuracy, quick release, changing the angle, and a deceptive release. You won’t always have a clear shot at the net, there’s almost always a defencemen in your way, and a forward back checking. When most players practice their shot, they just practice shooting straight at the net. In this video I’m going to show you how to practice a more game like shooting scenario. We’re going to look at three different positions in which we’ll change our angle. Take a look at the video below.

The first one is really easy. You drop your pile of pucks down, and then create an obstacle for yourself to shoot around. You want to pull the puck towards yourself, around the obstacle (treat it like a defenceman) so that you can still get a shot on net. Not only can this create a lane for you to shoot through, but it can also fool the goalie. Auston Matthews may be one of the best in the league at changing the angle before he shoots. Just look at this snipe where he fools the defense and goalie in one motion.

Here’s another beauty by Duchene

Notice how Matthews has his head up while pulling this move off. He needs to do this so he can ensure he finds a shooting lane, and the back of the net. While you’re practicing, try taking shorter and shorter looks at the puck. If you can feel where the puck is on your stick, it means you can have your head up even longer.

Make Your Own Lanes

Set up a few boxes, or whatever you have lying around, that can create a shooting lane for you. Obviously these are static lanes, so they’re not exactly like a game situation, but unless you have a buddy who’s willing to stand in front of you while you shoot through his legs, this is your best bet. Stand behind the boxes and try to pull that puck quickly to shoot in the different lanes. This gives you three different feelings as you shoot through three different lanes.

You can also start with the pucks on your backhand side, so that you have to reach for the pucks, choose and angle, and shoot all in under two seconds. This variation gives you more of a game situation feeling because you have to be constantly making adjustments. You can shoot on your forehand, your backhand, pull the puck across to shoot in the middle, whatever you feel like. There’s lots of options here.

Again, a really easy drill. Grab some sort of obstacle (garbage can, cardboard box, your little brother) and shoot around it. But first, try this. Look at what part of the net is available to you from where you’re standing, once that obstacle is in place. Now, put your face down where the puck is. See the difference? Your puck has a different angle than your eyes do. Train yourself to see all the angles, including the one the puck sees. Here’s a full video I did explaining the shooters illusion

I found this great list of the top 10 fun hockey drills. I thought I would share it on our blog for any coach that is looking for some fun hockey drills.A lot of hockey coaches want nothing more for their kids to win...