As a kid I spent a lot of time in my barn shooting pucks. Sometimes I would get tired of shooting at the same four targets (or I would break the targets) so I would always try to think of ways to make target practice a bit more fun. One of my better inventions was a goalie that I made using a sheet of plywood and a jigsaw (being a farm kid I was using power tools around the same time I learned basic math). Eventually I destroyed the goalie, first he lost his goalie stick, then his glove side hand, then his head, but it was a lot of fun shooting on it and creating it.

In this article and video I aim to spark your creative side and help make shooting more fun. In the video I give you a few ideas that just came to me while I was at the dollar store. Below the video I will give you even more things you can use as targets that are FREE.

More ways to add some razzle to your shooting practice 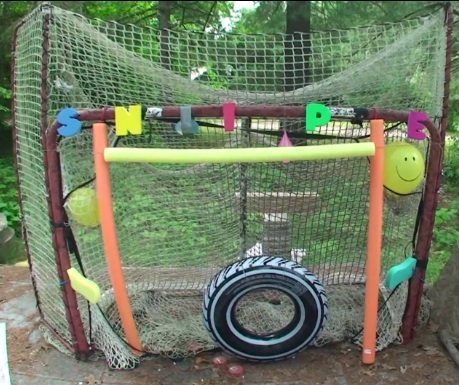 Here are a few more things you can shoot pucks at, all you need is some decent string

If you plan on taking a lot of shots I recommend the Ez-Goal with the backstop it gives you a few feet of extra room around the net, that way you don’t have to search for pucks as much. I use it on my net and it has saved me a lot of time and I am not worried about missing when I shoot top corner or bard down.

Leave your ideas for shooting practice in the comments section below