Wayne Gretzky is known as one of the greatest hockey players of all time, not only for his incredible skill, but also because of his Hockey IQ. Some people refer to hockey as chess on ice and to quote Lowell Cohn – “Some guys play hockey. Gretzky plays 40 mph chess.” A great hockey player should be able to read a play, and know not only where everyone IS on the ice, but also where every player WILL BE on the ice. This is hockey IQ
This  article is going to deal with the mental side of hockey that Gretzky knew so well.  I believe that hockey is at least 60 percent mental. This means not just being able to put your head on a swivel, it means being able to read plays, understand the ice and the rink and be able to react instantly to any situation that might arise.

Developing your mental skills doesn’t require you to be on the ice, near a hockey rink or even have equipment on. It is a proven fact that if you are confident and believe you can do something your chances of completing that task will rise astronomically. Before games I used to take ten minutes in the dressing room, throw my towel over my head and just sit there and imagine. I wouldn’t dream about girls or cars I would see myself on the ice taking and giving the perfect passes, stopping every player who came near me, and even scoring a few goals. This gave me a great boost of confidence on the ice and freed up my mind to focus on the game. If you have the slightest worry that you are going to be beaten it can be the difference between a great play or a huge disappointment. If you do this for a few minutes before practice and games I guarantee you will improve your overall game. 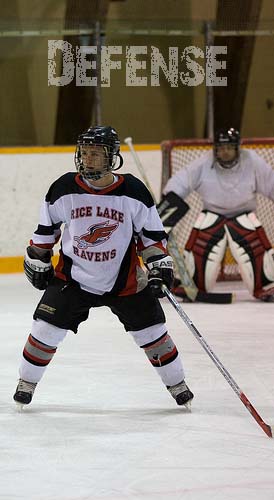 Being able to read the plays on the ice and react accordingly is one of the single most important assets to a hockey player. You could be the best skater in the world but if you do not understand how to get open for a pass or make that perfect play you are useless.
A great example of how mental training can help is on two on ones. Before the game I envision stopping any two on one. When it happens I am already prepared to stop two on ones. In my mind, I know I am going to stop it and I start looking ahead to what I am going to do with the puck after I stop the play. This confidence greatly increases my chances of stopping the play.
The same works on any situation on the ice. Just remember that if they do beat you, don’t get discouraged. When you are on the bench play out what happened in your head and try to see what you did wrong, and how you can improve. Then imagine how you could have made the play. Hockey is not only about training your muscles, but also about training your brain!
Another mental aspect of the game is emotion. Your emotions are one of your great strengths but also can be your biggest weakness. Keeping your emotions in check is a necessity for any hockey player.  A good example is when your team is on a penalty kill. If a player hacks your goalie and the ref does not see it, as a defensemen you have been trained to take that guy out. Say you let your  emotions get the best of you and cross check or slash this player, now the ref sees you do this and calls another penalty and your team is down another player.  I did this in provincials and though no goal was scored I got an earful from the coach.
Think of it this way, when you are on the ice, you are supposed to do things you learned in practice. Shoot, pass, stop players and throw body checks. If you are thinking of doing something that you did not learn in practice (slash, trip, crosscheck) then think for a second how it might effect your team. Coaches hate selfish players, so think about your team first, and your pride / ego second.

A good hockey player will be able to read their teams emotions and help change them. If your team is down, you will be able to feel it on the bench. Go out on the ice and give it 200 percent, skate hard and try to make some huge hits. If you have a good shift then get back on the bench and get amped about the shift, also try to get your team hyped up. You will see a change almost instantly on your bench. It only takes one amazing hit, goal or play to completely change the game. You have the power to change the outcome of a game.
I hope this helps you understand the mental plays in the game.  If you can take anything from this article it is to use your head before, during and after the game.
Photo Credit – Warm up:  Colder Than Ice – Defense: Mike Seliske – Chess: Mohammad