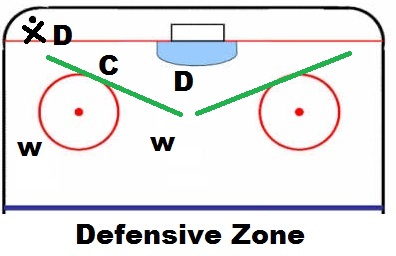 When you are playing organized hockey it is important that everyone on the team plays their positions and does “their job”. I like to teach each player what their job is so they understand where they need to be and what they should be doing in each situation on the ice. If just one player on the ice is out of position it can alter the outcome of the game, so it is important to understand your role on the ice is and the role of the other players. I have already written an article on the role of a winger in hockey, and in this article I will detail what a centerman should be doing in various situations on the ice.

The Responsibilities of a Centerman

In general the centerman is the “support man” this means he is helping out the other players when they are in trouble, the centerman is also considered the quaterback as he will win faceoffs, and lead breakouts. The wingers typically stick to their side of the ice, however the centermen has more freedom to roam. Even though the centerman covers the most amount of ice (and usually does the most skating) that does not mean you can just skate around and hope you get the puck. Your general duties as a centerman are to win faceoffs, cause trouble in front of the other teams net, stop players and pucks in front of your own net, score goals, make passes, help out your wingers, lead break-outs and back check.

Duties of the Centerman in the Offensive Zone 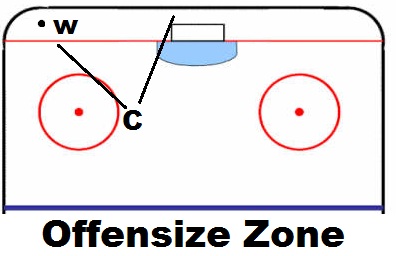 In the offensive zone (as in other zones) the centerman’s job is to offer support to the other team members. A good “general area” to hang out until you are needed is in the slot on whatever side the puck is on. Remember to always keep your feet moving and always be skating, this makes it easier to get going when you need to!

While you are in front of the net you will be reading the play, keep an eye on what the other team is doing and what your team is doing. If your winger has possession of the puck get open in front and call for a pass. Remember your other winger will also be trying to get open in front of the net so don’t block him. If your other winger is close to the net then go to the high slot, if your winger is in the high slot then go to the “backdoor” of the net or if you think your winger will get a pass and shoot just screen the goalie and be there for the garbage goal (rebounds).

If your winger does not have possession of the puck then read the play, will he get possession? If you are unsure get a bit closer so you can help him out if help is needed. Remember you are the support guy, so if your winger is getting double teamed along the boards get in there and dig for the puck to help him out.

Remeber to Give your players options if your winger has the puck and is looking for a pass either get open in front of the net, or head behind the net so your winger can cycle the puck back to you. If the winger is heading up the boards and cycles the puck back to you then look for him moving to the net, this is a great way for the winger to shake the D and then get open and then you can feed him the puck for a shot on net.

What if the other team has the puck?

If the other team has possession in the offensive zone then you should switch to defense. They will be attempting to break out and you don’t want that to happen. While on defense in the offensive zone you need to read the play, see where guys are moving, and watch where the guy with the puck is looking, this will help you predict their moves and hopefully intercept a pass or strip the man of the puck and re-gain possession. Usually when they get possession you should start moving towards the blue line, that way if they try to make a break out pass you can intercept, or at least have a bit of speed going to back-check / keep up with the play, you don’t want to get caught deep in your end with the other team breaking out.

Duties of the Centerman in the Defensive Zone

When the other team has the puck and is trying to score they will be trying to get open in front of the net, usually they will have a winger and a centermen, and sometimes a D-man will sneak in close to the top of the circle if the opportunity arises. This means there are 1-3 men who are looking for a puck in front of the net. On your team you have two defencemen, one is usually busy trying to get the puck, while the other is in front of the net being a BOSS and not letting people get near the net or get open. As a centermen you want to help him out and pick up anyone who might be open. Hang out in the slot, block the cross ice passes, and tie up any open man.

A lot of the goals that get scored come from cross-ice passes, one-timers, and back door tap in goals, these occur when a player on the opposite side of the ice gets open and his team mate feeds him the puck for a nice open net goal (especially if you have a slow goalie). As a centerman you want to make sure this does not happen. Try to see what lanes are open and block them, you don’t have to shadow a player, but keep your head on a swivel and take away any passing opportunities while your d-man battles in the corner to start the break-out. If your defenseman is outnumbered along the boards you can go and help him out, just make sure you aren’t leaving a man wide open in front of the net (in this scenario there would probably only be one person in front of the net and your other defensemen should have him covered anyways).

Thanks to HockeyShare for this great video 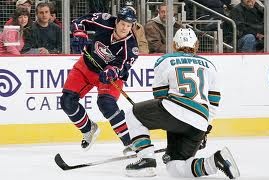 Tips for clogging up the center area and blocking passes

What happens when your team gets the puck?

When your team gets possession in the defensive zone it is time to start the break-out. There are a number of ways to break out but it usually starts with the d-man passing to the centermen who then feeds a breaking winger, or the winger getting the puck and feeding it to the centerman.

Make sure the puck gets out of your end!

Sometimes when the defensemen gets the puck all three forwards start skating for a breakout pass, but this can cause problems. Read the play, does your d-man have a clear pass to a winger? If he does then great, start skating out of the zone for a pass from your winger. If the defensemen doesn’t have a clear pass you can circle in and get an easy short pass to start the break out. Another option is when the defense have the puck behind the net, this is your cue to skate hard behind the net and either pick up the puck, or leave it and then get a pass from the d-man, or head to center for the d-to-winger-to-centerman pass. Remember you are the support man so you should always be giving your players options for passes

Duties of the Centerman in the Neutral Zone

In the Neutral zone you are either attacking or playing defense. For the break out you will either have the puck, or looking to get the puck. If you have the puck you can pass to the head man (if that’s an option) skate with the puck into the other teams end, or if the defense have you covered just go for a dump and chase, or dump and change.

If the other team has the puck you are basically trying to stop them from getting into your zone. In most cases you will be playing catch-up so skate hard to get into the play and try to get in the way of passes, or sneak up on the guy with the puck and strip the puck from him. If you are in front of the play you can help the defensemen, try to either pick up the man closest to you who is trying to get open for a pass, or if you are closest to the guy with the puck match his speed and force him to the boards. 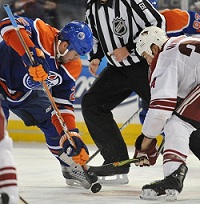 Tips for taking and winning Faceoffs

Winning the faceoff is very important no matter who’s end you are in, below I will outline a few tips that should help you win more faceoffs

How to Win a Faceoff Video

This is a video we did on how to win Faceoffs, if you want a few extra tips you can also see the full article on how to win face-offs

WOOH, that only took me a few hours to write and edit, hopefully I covered everything 😀 In summary the centermen will usually be hanging out in the slot / circles in the offensive and defensive zones. While in that area the centermen should be looking for opportunities to get the puck either by calling for a pass, intercepting a pass, or by recognizing a moment when his teammate needs help and then going in and getting the puck. The wingers and defence have areas they should always be, but the centermen has the freedom to roam around these areas and help out. Faceoffs are very important so the centermen should take this skill very seriously and always be working to improve his faceoff win percentage. Centermen should also be good skaters and be able to give and receive passes very well.

I think that pretty much sums up the role of the centermen, if I missed anything or you are unclear about something just let me know in the comments below and I will do my best to respond.