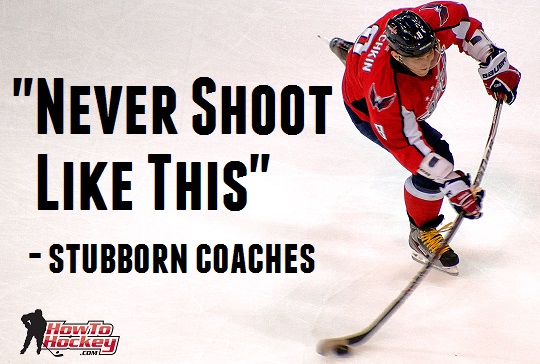 Wait… So I’m NOT supposed to shoot like Alex Ovechkin, Phil Kessel, Sidney Crosby and many other top scoring NHL forwards? That’s what I was told many times growing up and still hear today. I wanted to publish this article and video to help debunk this myth. The fact is there are many ways to shoot, and each method is effective in the right situation

If you ask me, there is no WRONG way to shoot, only more effective and less effective. If the puck ends up in the back of the net, it’s the right way to shoot. As long as you can get decent power, accuracy and release the shot is worth practicing.

My Philosophy on Shooting

There are the four basic shots, the wrist shot, snapshot, backhand, and slapshot. With each of those shots there are variations on how you can execute each shot. Some are better for power and some are better for a faster release. I believe that hockey players should be familiar with every method of shooting, and when you should use each type of shot. A hockey player should be able to shoot the puck with power and accuracy off either foot, there is not enough time to set up the perfect shot every time.

A player can achieve this by varying their body position, and foot positioning while practicing.

What is the “wrong” way to shoot?

I made a video to demonstrate the wrong way to shoot. This is something that a lot of hockey coaches still say, so I wanted to address it.

Check out my iSnipe app for Apple and Android I have 16 shooting videos, a shot tracker, a journal, and two cool training tools to help you with a quicker release. It’s only $2.99!

Here is a basic summary of the four main types of shots, and when you might want to use them.